A retired DC high school music teacher, celebrated for changing her students’ lives, tracks down hundreds of former protégés to sing together once more.

It was 1988 in Ronald Reagan’s America and Marion Barry’s Washington DC, when an ensemble of Black public high school singers raised $160,000 to travel halfway across the world to a chorus competition in Vienna, Austria. The Eastern High School Choir returned home triumphant—with a Silver trophy and invitations to perform with musical icons, on national television, and at the White House for years to come. Behind the scenes, performance fees and public-private partnerships funded an astonishing choir-to-college pipeline for their working class community.

About three years ago, Dr. Joyce Garrett, the force behind the Eastern choir from 1972 through 2005, envisioned a reunion concert to commemorate that legacy. Her planning committee of former students wondered, “Will enough people show up?” By the evening of the concert in July 2018, volunteers were hunting for extra chairs as an eager line wrapped around the 3000-seat venue. Inside, almost 300 Eastern choir alumni—from four decades—prepared to sing their hearts out.

We follow the road to that concert event, interlacing rehearsals and performances with intimate character portraits, celebrity voices, and revelations about the transformative power of choral music. We revisit an era when many Black educators in maligned, under-resourced school systems fought to give their students their best, regardless of circumstances. REUNION CHOIR (working title) will answer the obvious “Where are they now?” question and pose a more complicated one to today’s viewing public, “Where are WE now?” 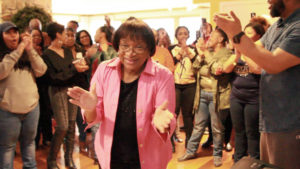 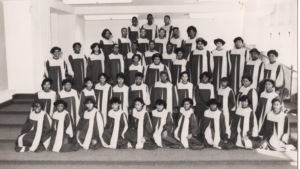 This project is supported in part by a grant from HumanitiesDC as part of the “Humanities Grant Program,” an initiative funded by the DC Commission on the Arts and Humanities.