The status quo can no longer stand. As so many of us recommit (or awaken) to this truth, and roll up our sleeves to cultivate the promise of this season, I believe we must also reckon with its pain and casualties. I’ve often compartmentalized or avoided feeling the devastation caused by the assault on Black life, the fallacy of white supremacy, state-sanctioned violence, inadequate and inequitable healthcare, and economic stratification around the globe. The COVID-19 pandemic and the recent string of video recorded murders compel me/us to be present to what we have accepted as the status quo. And in this, I find hope.

I am clear about my role as a global citizen, Black woman artist and Founding Producer at Kuyamba Media. I create authentic depictions of Black community life. Through my films, I aim to decolonize memory and imagination. To reveal, inspire and allow us to heal. In this season, I am inspired to focus in on my contribution/assignment while standing in solidarity with you as you focus on yours.

Friday, June 19 | FINDING COMMON GROUND: HOW LOCAL PUBLIC TELEVISION STATIONS AND FILMMAKERS CAN WORK TOGETHER IN A TIME OF CRISIS 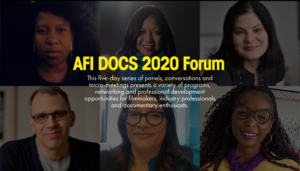 The closest thing you will find to “patriotism” in me is my love for three institutions: the public library, public transportation and public television. I get to geek out about the latter of those this Friday on a panel at the online AFI DOCS film festival. If you would like to tune in, see the details here.

It’s been a minute since I’ve written you, so here is a quick list of other recent happenings at Kuyamba Media:

Thanks for your time. Let’s stay committed, present and hopeful.
Malkia